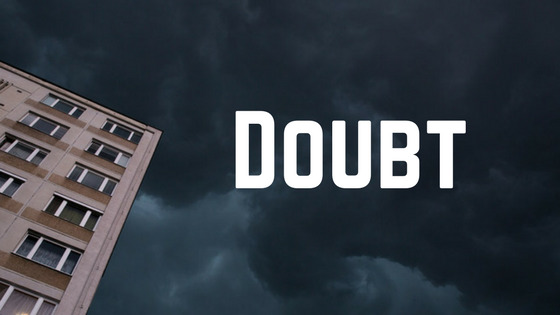 Last month I received an email from a screenwriter client who, after receiving a “thanks but no thanks” letter, wanted to know what I tell myself to fight off the doubts that I’m not good enough. – and stay focused on finishing my story…

It was such a great question and it really started me thinking – what exactly DO I tell myself to fight off the doubts and keep going?

Self-doubt affects just about every writer I know and I’m certainly no stranger to it. Being a writer means endlessly seeking validation and approval from the outside world. And sometimes we just don’t get it. Cue the doubts aka the dark vortex of doubt aka the creeping fingers of dread aka the paralysing, grey corset of doom.

So what do I tell myself to get the crazy under control?

I tell myself to remember the achievements, successes, and praise.

Remember that time you did good? “Doing good” can be anything from winning an award to impressing folks at your writing group with a killer first line or simply finishing your manuscript. No matter what “doing good” looks like to you, consciously recalling that awesome time is a useful reminder that if you did it then you can do it again

I tell myself that the magical day when all the doubts go away is never going to come.

If you think that by achieving awards, publication, production or sales you will make the doubt go away – I’ve got some bad news, it won’t. Some of the most successful writers I know are regularly floored by self-doubt. As a breed we’re constantly uncertain, it’s just part of the deal, and the approval we do get is invariably short term. So let’s just live with that.

I tell myself how taking action always makes me feel better.

And it does. When you’re trapped in that self-doubt vortex there’s really only one way out and that’s to stop mentally eating yourself alive and go do something. Whether it’s seeking counsel or feedback from a friend or starting a new project – movement is the opposite of paralysis.  Click to tweet this.

“Doubt can only be removed by action.” Johann Wolfgang von Goethe

Which of these scenarios is worse – continue to write with mixed success and likelihood of failure along the way OR stop writing altogether and pine for what could have been before dying with a heart full of regret?

Forge on good people and if you’re craving some dedicated screenwriting knowledge – my two-day Beginner’s Guide to Screenwriting Workshop is happening mid April.

2 thoughts on “How to Fight “The Doubts””