I’ve been working as a writer for over 20 years so I really get the challenges that come with creative work. In addition to being a writer I run writing craft workshops and programmes via Beginner’s Guide Writing Workshops.  And I run a subscription based writing group called The Writing Room

My current writing gig is working on the latest series of The Brokenwood Mysteries (TVNZ/South Pacific Pictures) and in November I start on Series 3 of “My Life is Murder”  My latest play “The Campervan” just finished a sell out season at The Pumphouse Theatre in September 2022.

Earlier this year I was awarded NZTVA BEST Drama Script Award 2021 for the tele-feature “The Tender Trap” (w Riwia Brown)  Other recent work includes “Under The Vines (Acorn TV/TVNZ)  and the light crime series “My Life Is Murder” (Acorn TV/TVNZ).  SCROLL ALL THE WAY DOWN FOR MY FULL BIO

Join me for the Big Mid-Spring Write-In – a half-day writing workshop that will get you cracking on that story! (Auckland) BOOK HERE 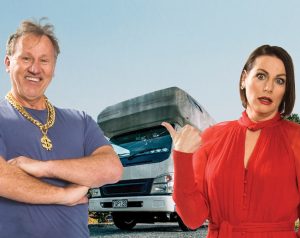 Produced by Tadpole Productions.  – this play centres around successful businessman Hugh and his second wife who lead a life of luxury and privilege until Hugh decides to live in a campervan.   Read Review

Kathryn is an award-winning screenwriter who has worked in the NZ & Australian television/film industry for over 20 years.   She has significant television and film credits (see credits below) and has developed numerous television series for NZ’s major production companies.

She recently co-wrote tele-feature “The Tender Trap” which picked up the NZTVA BEST Drama Script Award 2021.  Her most recently produced TV credits include “Under The Vines” and “My Life is Murder.”  In 2020 she was the script editor on TVNZ’s limited series “Black Hands“. The world premiere of her latest play “The Campervan” enjoyed a sell out season at the Pumphouse Theatre in September 2022.

In 2018 she was a Seed Grant (Advanced) recipient and a co-writer on the TVNZ television series “The Cul de Sac” and “Fresh Eggs.”

Kathryn has worked as a Script Assessor for NZOA and helped numerous writers and producers move their projects forward.  She’s a regular guest on RNZ’s The Panel and has run sell-out workshops at the Auckland Writers Festival. In October 2019  she was a speaker at the Fourth World Conference of Screenwriters in Berlin. She was also a serving member on the New Zealand Writers Guild board for over 5 years.

Kathryn produced her first play ‘Mike & Virginia” (co-written with Nick Ward) in 2011 as part of the Comedy Festival and it was subsequently produced in Wellington at Circa Theatre (2013). 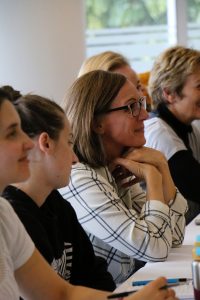