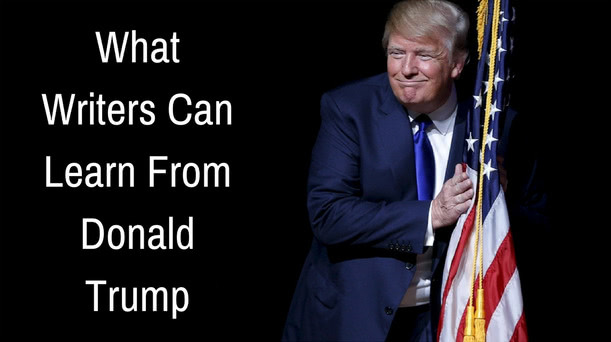 Like many people around the world, I’ve been watching the vaudeville show that constitutes the Trump presidency with incredulity and growing disquiet.  Given his kneejerk responses to just about everything and I think the world can be forgiven for being slightly nervous.

But where’s this worrying going to get us? In truth it will get us about as far as me posting my outrage on Facebook i.e. absolutely nowhere.

All I can really do is try to get something positive from the situation. So here it is – here are five things writers can learn from watching this hot mess unfold…

No matter whether you categorise him as villain or anti-hero, Trump provides a living, breathing masterclass in character motivation. Why does he do what he does? It’s all there in overt technicolour – the ego, the impulsive behaviour, the drive to avenge perceived wrongs, the entitlement, the thirst for power and the win at any cost attitude. All we have to do is sit back and do what we do best – observe.

2) It’s smart to know your audience and play to your strengths.

Trump knows his audience. He knew who his audience was before the election and gave them what they wanted. There’s a great lesson in here – who is your audience? Who is going to read your work? What do they expect from you and are you delivering it? Have a think about that.

3) Don’t let detractors derail you from your goal.

Trump is regularly on the receiving end of a tsunami of loathing and ridicule. He digs in but he also invests plenty of time in hitting back at his detractors. What a waste of energy!

Sure our detractors aren’t going to be as big or powerful as his but surely the smarter play is not wasting precious time trying to convince or retaliate. Just get on with being good at what you do and go around those pesky haters.

4) Don’t go with the first thing that you write.

Whatever it is you’re writing (yes that includes tweets)it behooves you to put the first draft aside, think about it, then go back and rewrite the better, smarter version.

The leader of the free world doesn’t take criticism well – and look how well that works out for him. Does his reaction to criticism endear him to folks or impress anyone? No, it does not. If you’re a creative there’s going to be criticism in your career. Whether it comes during the development of your project or once your baby is out in the world – it’s going to happen.

There are also going to be rejections and disappointments, some of which will be painful. So do yourself a favour now and develop that extra layer of epidermis because that’s what a pro does – and behaving like a spoilt toddler isn’t a good look.

Interested in joining The Writing Room? Check it out here.