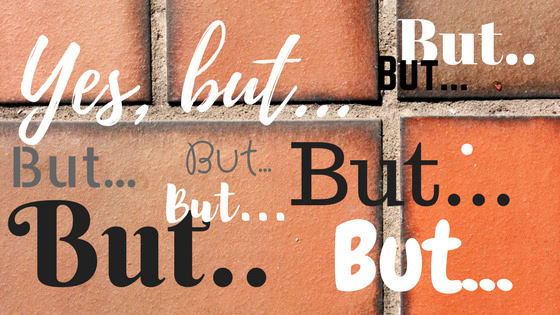 I want to write a screenplay/book/play BUT I don’t have time.

I want to finish my book/short film BUT can’t because I have children.

I want to apply for that writer’s grant I heard about BUT there’s probably no point.

I want to enter that short story competition BUT only real writers ever win.

I want to write a book BUT I’m afraid I’m not good enough yet.

I want to write short stories BUT I worry I’m too old to start now.

I want to write BUT I worry I’m too young and that people won’t take me seriously.

I want to write for TV BUT I don’t know other writers or industry people.

I want to write plays BUT I have to spend most of my time making a living.

I want to write one day BUT I’m waiting until I retire/until work calms down/until the house is renovated/until I’ve done one more workshop /until the kids have left school etc, etc, etc, etc.

I hear variations of these excuses all the time. And sometimes I hear one or two coming out of my own mouth – goddamnit. But there are always numerous, perfectly freaking logical reasons for not investing your time in writing and, um, so what?

You either want to write or you don’t. You’ll do it or you won’t. Excuses don’t change anything.

We all know if you want to write there’s really only one way to do it and that’s to turn up regularly at your keyboard and start typing. Boring I know but that’s about it. All the other aspects of writing like rewriting, proofing, coming up with titles, pitching, going public, marketing etc come later.  So what’s actually stopping you writing?

It’s maddening that we can genuinely want to do something but our own internal nonsense gets in the way. But it does! And it’s this nonsense that’s at the heart of most procrastination.

Suffering from the BIG BUT? Here are some thoughts and techniques I find useful…

1. Identify your main excuse and work out if it’s actually true.

Look for facts that back up the excuse you’re giving yourself.Then look for some facts that prove the opposite. It might be that you’re stuck in a self-limiting belief that isn’t actually true at all.

Is your excuse what’s actually stopping you getting word down on paper? Or it is something like fear of failure or being judged? Is it lack of confidence? If that’s the case – keep in mind that no-one will see your work until you let them. PLUS keep in mind that failure is normal – and useful to your process. Very few people pop out of the womb expert writers.

Identify what it is you want to achieve and then break the goal into bite size pieces. E.g. A 4000 word short story divided by 8 weeks = 500 words per week. (I know you can do that in an hour a week.) Even if all you do is write for 1 hour a week – you will develop a writing habit AND progress your project.

4. Think about what YOU need to help you get past the BIG BUT.

It might be finding a writing buddy like you to bounce ideas off. It might be finding a private space where you can be alone with a journal or laptop. It might be attending a workshop or joining an online writing group. It might be you need to implement a reward system (if you do this then you get that.) It might be as simple as setting the timer on your phone and not moving from your computer until it goes off. Or buying a gorgeous journal and heading to a cafe – whatever.

Don’t think about it as an onerous chore that must be done or you’re a failure. Or that it needs to be perfect or you’re a failure. You’re playing with words! That’s such a pleasure. Think about how privileged you are that you’re free, educated and imaginative enough to be able to create something from your imagination! And there’s a surprising amount of satisfaction to be had in achieving small regular goals.

6. Get real about the Biggest But of all – I Don’t Have Time.

Thing is, you actually do have time you’re just choosing to spend it doing other things. Here’s the thing about time – it’s not a renewable commodity so the SOLUTION is to sift through your life to find the activities you can realistically replace with writing. For me that activity is watching TV. (Don’t judge me!) I’ve also printed out the words “You Are Going To Die” and stuck it to the noticeboard above my computer. It’s a great reminder that while I do have time, it will eventually run out so best I use it wisely.

Want to stop dreaming and start doing?  Check out my Writing Room…

Forge on good people and let me know if you have questions.